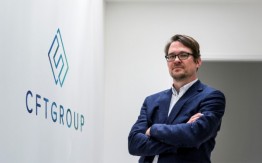 Duesday has been shortlisted for Best Consumer Payments Initiative in FinTech Future’s PayTech Awards, which recognise excellence and innovation in the use of IT in the finance and payment industry worldwide.

CFT Group and Duesday have also been featured in the Tech Nation 2018 Report, released last week which champions tech entrepreneurs and start-ups through media coverage and growth programme support.

In the UK, there are over 40 billion payment transactions each year worth £75 trillion and with Direct Debit payments celebrating their 50th Birthday this year. CFT Group’s challenge was to create a new payment method more suited to the 21st Century. The result was ‘Duesday’.

Duesday is a mobile platform which gives consumers a flexible alternative to pay regular monthly bills, the ability to split bills between individuals and even earn points and discounts for paying early. Merchants benefit from improved cashflow and more loyal customers.

The Duesday concept launch took place in February 2018 and the app is growing its community through testing within key target audiences and early access registration.

CFT Group co-founder and CEO, Marcus Kern comments; “Duesday will revolutionise the way merchants collect, and consumers pay regular bills. We are delighted the industry is as excited about Duesday as we are.”

He adds; “We are currently developing our merchant take-up programmes across the UK. We are testing the platform with our early adoptors – young people and those on irregular incomes, as well as house sharers and couples, before launching to a wider audience”.

CFT Group is based in Liskeard, South East Cornwall, it secured more than half a million pounds European Regional Development Funding together with private investor funding last year for research and development into payments and escrow solutions. Since then the team has grown to 13, with plans for more recruitment later this year.

The Marketing-PR Company is a trading name of WMPR Ltd | Company registration number 5356849, registered in England and Wales | VAT registration 860370339